A Nightmare on Elm Street is the shared name of two video games released in 1989, loosely based on the series. From among those films, Dream Warriors and The Dream Master were particular influences on the gameplay of each.

In the game box and in the manual contains the following synopsis:

Something frightening has been happening on Elm Street lately. It seems that with each waking day another gruesome discovery is made... another neighborhood teen has mysteriously passed away into the dark stillness of the night. Everyone says it's "natural causes," but it seems as if something (or someone) has been picking them off one by one in their sleep. It's a horrible nightmare come true... and this nightmare has a name; Freddy Krueger.

It's up to you and your remaining friends to search Elm Street for his bones, which have been scattered about, then collect and burn them in the High School furnace. If you can just stay awake long enough, you might be able to end Freddy's reign of terror for good. You had better hurry though, it's getting late and you can feel your eyelids getting heavier and heavier by the minute.

This plot is parallel of the film series, a spin-off.

Up to four players control characters who jump and punch their way through Elm Street locations as they collect the bones of Freddy Krueger to place them in a furnace and end his reign of terror. Each character can withstand only four hits from opponents before losing a life. With four players two of the characters appear as females.

An on-screen meter slowly diminishes (more quickly when sustaining damage), representing how close a particular character is to falling asleep. Obtaining cups of coffee within the game restores characters' sleep bar. When any character's sleep bar empties, all the players are transported to the dream world, where enemies take on new appearances and are more difficult to defeat. In the dream world, coffee cups are replaced with radios, which return the characters to the normal world and difficulty.

Also, Dream Warrior icons appear that, once collected by any player, permit transformation into one of three "Dream Warriors". Each warrior has a projectile attack and improved movement: ninja (throwing stars, jump kick), acrobat (javelins, somersault), and magician (fireballs, hovering). These icons appear only in the normal world, and can be used only in the dream. If a character remains asleep too long, the film's theme song plays and a combative encounter with Freddy ensues.

Upon collecting all the bones in a level, the player is automatically put in the dream world and battles Freddy, who takes on a special form similar to those presented in the films. The final level is set at Elm Street High School as players navigate to the boiler room to burn Freddy's bones. Here one final battle with Freddy Krueger occurs.

The game can utilize the NES Four Score or NES Satellite accessories to enable four-player gameplay.

According to the game magazines Nintendo Power and a Nintendo of Europe, the original concept of this game varied greatly from what was eventually released. In the original game concept, the players would control Freddy Kruger and should kill the teenagers who were attempting to gather his scattered bones in order to rebury them.

Follows the plot of the prototype version of the game:

You ARE Freddy Kruger. A horde of obnoxious teenagers is trying to get rid of you by finding your scattered bones and burying them. The only way to stop them is to kill them. You can travel along Elm Street through the electrical and plumbing lines or step into a mirror and step in another room.

The kids have weapons to battle you with and some of them even possess powerful "Dream Alter Egos" ...but if you can strike before they wake, they'll trouble you no more. So sharpen up your finger razors and get ready to slash, 'cause Freddy's here!

It's probable that this version of the game has been canceled to prevent polemics, for example, years earlier had already been released a video game based on the movie The Texas Chainsaw Massacre for Atari 2600 where the player controls the murderer with the objective of chase and kill victims, the game was a financial failure precisely because it is politically incorrect and many sellers refused to sell it fearing reprisals.

References for the movies 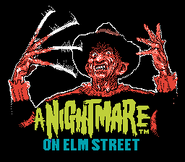 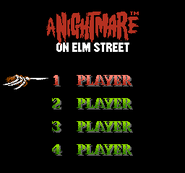 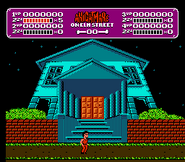 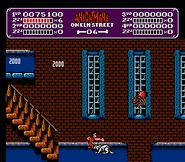 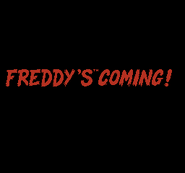 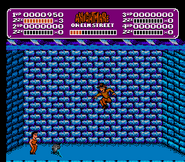 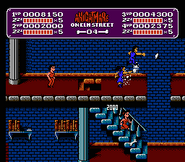 Characters in the multiplayer mode. 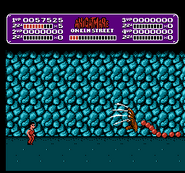 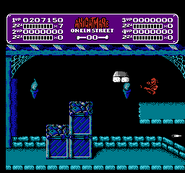 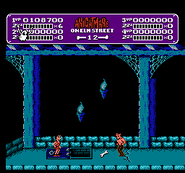 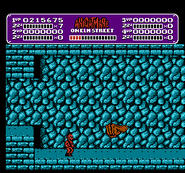 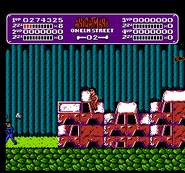 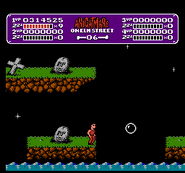 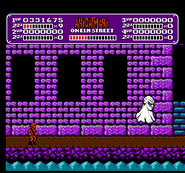 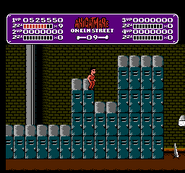 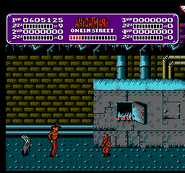 The final battle with Freddy.

Retrieved from "https://nightmareonelmstreet.fandom.com/wiki/A_Nightmare_On_Elm_Street_(NES_game)?oldid=30937"
Community content is available under CC-BY-SA unless otherwise noted.