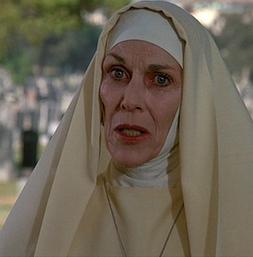 
One of the Maniacs

CHILDREN:
Freddy Krueger (son; deceased in the physical world, but alive in the Dream World)

was a nun who worked at The Hathaway House (frequently confused with Westin Hills Asylum which wasn't built until years later). She was also the mother of the dream demon, Freddy Krueger. Amanda appeared in Dream Warriors and The Dream Child. Amanda appeared as a spirit who was locked inside the infamous tower of the Hathaway House, and was also the one of the few A Nightmare on Elm Street characters that could both defeat and control Freddy.

Amanda Krueger was born in Springwood, Ohio in October, 1907.

In 1925, at the age of 18, Amanda worked as a nun at The Hathaway House (also known as Westin Hills Asylum). Her name was Amanda Krueger, but she changed it to Sister Mary Helena as her name in Christ.

In December, 1941, (just a few days before Christmas), Amanda was accidentally locked in the tower when the guards hurried to go home to their families. Amanda was left alone with the crazy inmates for several days and was brutally beaten and raped. When she was finally found, Amanda was barely alive and pregnant.

Nine months later on September, 1942, Amanda gave birth to a boy named Frederick Charles Krueger (The Bastard Son of 100 Maniacs). Shortly after, Freddy was adopted to Mr. Underwood, an abusive, and alcoholic adoptive father. Amanda followed Freddy's trial after he was arrested for the murders of several neighborhood children. Freddy was released on a technicality and Amanda was so distraught that she committed suicide shortly after she heard the news. Amanda's body was never found until decades later by a nurse named Yvonne Miller. The tower where Amanda hung herself was sealed and that wing of the hospital was closed. A headstone was placed in the Springwood Cemetery for "Sister Mary Helena". However, it was merely a memorial marker as no body was ever buried there.

Amanda returned twice, in spirit form, to help those who fought Freddy. Her first appearance was in Dream Warriors. Amanda appeared as an old nun who went by her name, Sister Mary Helena, and tried to help Dr. Neil Gordon save the last Elm Street Children. At the end, Neil found her grave site and learned that Freddy's Mother had helped them.

Amanda's second appearance was in The Dream Child. After his defeat in the The Dream Master, Freddy used Amanda to give birth to him again in the Dream World. Upon his return, Freddy remained afraid of his mother's power and tried to keep her sealed away. Alice Johnson needed to find Amanda's resting place so that this power could be used in the fight. Alice didn't have enough time to search, so she had a friend try and find the body. The body was found and Amanda's spirit was freed just in time to help Alice defeat Freddy. After his defeat, Freddy was left in his infant form, which Amanda then absorbed back into her. Eventually Freddy escaped, and continued his reign of terror in Freddy's Dead.

This article is a stub. You can help Elm Street Wiki by expanding it.

Retrieved from "https://nightmareonelmstreet.fandom.com/wiki/Amanda_Krueger?oldid=21304"
Community content is available under CC-BY-SA unless otherwise noted.