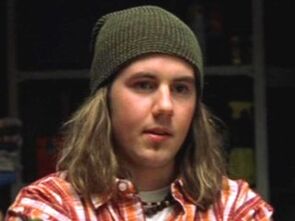 Bill Freeburg was a Springwood teenager who joins up with Lori Campbell and her friends to try to defeat Freddy Krueger and Jason Voorhees. He appeared in Freddy vs. Jason and is the eighteenth victim of Jason Voorhees during his rampage for Freddy Krueger.

A frequent marijuana user, Freeburg was introduced in the film at the high school where he attempted to coax Gibb Smith into going to the rave party. At the rave party, Freeburg witnessed the killing spree of Jason Voorhees. He teamed up with Lori Campbell, Will Rollins, Kia Waterson, Charlie Linderman, and Deputy Stubbs in an effort to stop both Freddy and Jason (although he believed that more concern should be focused on defeating Jason, since he is able to attack and kill in the real world). The group traveled to Westin Hills to retrieve Hypnocil after Will told them about it. While getting high at Westin Hills, Freddy managed to appear to Freeburg in his drug-induced hallucinations as a pot-smoking caterpillar. Freddy ended up possessing Freeburg and poured out the bottles of hypnocil while filling up two needles full of sedative.

The group was fleeing from Jason, but Freeburg (still possessed by Freddy) stayed behind to wait for Jason. When Jason appeared, Freeburg injected him with two needles full of sedative, but was bisected at the waist before Jason was rendered unconscious from the sedative and when Freeburg took control of his body again.

Bill Freeburg at the Friday the 13th wiki.

Retrieved from "https://nightmareonelmstreet.fandom.com/wiki/Bill_Freeburg?oldid=21402"
Community content is available under CC-BY-SA unless otherwise noted.