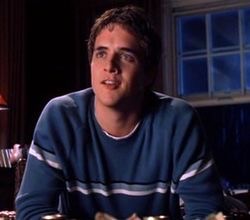 Blake was a Springwood teenager and the best friend of Trey. He was the third falling victim of the Freddy vs. Jason killing spree to die.

Blake Mueller was a teenager who lived in the town of Springwood, Ohio in the early 2000s.

He lived with his father, his mother and an younger sister in a suburban home that was either on or near Elm Street. Blake was best friends with an a-hole named Trey Cooper.

One evening in 2003, Blake and Trey went over to Lori Campbell's house to crash a private slumber party.

Blake carried a whisky flask with him and was already inebriated by the time they got there. While Trey went off to go have sex with his girlfriend, Gibb Smith, Blake sat back in a chair, scratched his crotch, and prepared to put the moves on Lori.

He tried impressing her with his knowledge of Feng shui, noting that her home had a "good flow". Lori's friend, Kia Waterson, desperate to get Lori back into the dating circuit, suggested that Lori should show Blake the Feng shui of her bedroom.

Then, Lori did everything she could to keep Blake away from her. When he asked her to give him a tour of the house, she told him that he could start on his own, by getting some beer out of the kitchen.

Blake went into the kitchen and took note of the fact that the back door was open. He could never have known that the undead masked serial killer known as Jason Voorhees had entered the premises.

Thinking little of it, he took a tug on his flask and shut the door. Soon after, the power went out in the house (a classic Jason M.O.). Then, Lori and Kia went into the kitchen and Trey startled them which he told them that the door was open, so he shut it.

At this time, Jason Voorhees had ventured into an upstairs bedroom and brutally murdered Trey Cooper. When Blake and the girls discovered his body, they all ran from the house screaming.

Blake went home and sat on his front porch, mourning the loss of Trey. He continued to take occasional sips from his whisky flask.

His father came outside and admonished him for not looking after his little sister as he was supposed to which Blake snapped back about how his best friend had just died. As his father went back inside, Blake made a vow to get revenge on whoever did this to Trey.

Exhaustion and excessive alcohol caused Blake to pass out. As he did so, he began dreaming. In the dream, he thought he heard a noise coming from the bushes across the street.

Then, he went over to investigate and then saw a goat with blood in its beard standing in front of his house. The dream demon known as Freddy Krueger appeared and extended his shadow over Blake in an effort to kill him.

However, as the town of Springwood had come to forget about Freddy's previous reigns of terror, he had not yet mustered enough power to kill on his own, so Freddy decided to let Jason have some fun and nicked Blake's chest with one of his finger razors to wake him up.

Blake awoke back on the front porch of his house. He turned to his left to see his father sitting next to him. He tried speaking to him, but the man said nothing.

His father's head then fell off, having already been sliced by Jason Voorhees. The head fell into Blake's lap and he screamed in terror.

As he turned around, Jason appeared before him, brought his machete down upon Blake who tried to deflect the blow with his father's severed head, but this was not enough to keep from being killed. His blood splattered all over the windows of his house.

Blake's death was later ruled as a result of a murder/suicide by the Springwood Sheriff's Department.

Blake's Death
Add a photo to this gallery

Blake Muller at the Friday the 13th wiki.

Retrieved from "https://nightmareonelmstreet.fandom.com/wiki/Blake?oldid=21406"
Community content is available under CC-BY-SA unless otherwise noted.