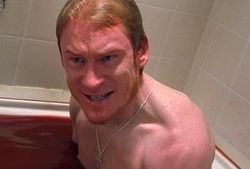 Bobby Davis is a character who only appeared in a dream sequence and in a photograph in the 2003 crossover film, Freddy vs. Jason.

He was dead from Freddy Krueger and he was played by Zack Ward.

Bobby Davis was the older brother of Mark Davis. He had red hair and drove a custom van. Mark idolized his brother, but was completely unaware of the fact that Bobby was having nightmares wherein he was being tormented by a sadistic dream entity named Freddy Krueger.

On January 18th, 1999, Bobby Davis was found dead in a blood-filled bathtub. Bobby killed himself which left Mark greatly traumatized. He was sent to the Westin Hills Psychiatric Hospital in nearby Westin Hills.

In 2003, Mark escaped from Westin Hills along with his friend, Will Rollins. Later, Mark returned home and stared at a photograph of his family. He lamented to himself, "You've always been there for me, bro."

Feeling the need to sleep beginning to overwhelm him, Mark opened a bottle of Wake Aid.

As he closed the door to the medicine cabinet however, he saw Freddy staring back at him in the mirror. It was at this point that Mark began to realize that it was too late. He was asleep and dreaming.

Turning around, he saw his dead brother sitting in a blood-filled bath tub. Although it looked like his brother, it was Freddy's voice that came through.

Then, Freddy told him how everyone forgot about him and he needed Jason Voorhees to help everyone remember.

The image of his brother rose from the tub. The slice marks upon his wrists were open and bleeding. Freddy killed Mark moments later to send a message to the people of Springwood, Ohio.

Retrieved from "https://nightmareonelmstreet.fandom.com/wiki/Bobby_Davis?oldid=25551"
Community content is available under CC-BY-SA unless otherwise noted.