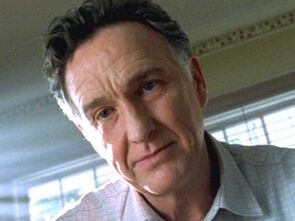 Prior to the events of Freddy vs. Jason, Dr. Campbell was spotted stabbing his wife to death by Will Rollins (who had seen it all will sneaking up to Lori's room one night). This caused Dr. Campbell to have Will admitted to Westin Hills Asylum, and Dr. Campbell told Lori her mother died in a car accident in order to keep Freddy Krueger (the true murderer of Lori's mother) contained. Dr. Campbell also did consulting work for Westin Hills, and was responsible for giving several patients overdoses of the dream suppressant Hypnocil, which left them in comas.

Role in the Film

Dr. Campbell is one of the many adults in Springwood responsible for the suppression of Freddy Krueger. When Lori begins to not sleep because of the nightmares, he drugs her orange juice with Hypnocil, but she doesn't drink it because Freddy scares her when she falls asleep and she decides to head to school. Later, he spots Will Rollins and Lori in a van and orders her to leave. Dr. Campbell threatens to have Will re-admitted to Westin Hills and strangles him before Lori runs off. At home, he indirectly reveals knowing about Will being in Westin Hills the entire time to Lori and reassures her that her mother died in a car accident. Lori runs up to her room and he gives chase, but she escapes from her bedroom window.

Freddy also appears as Dr. Campbell when Lori falls asleep while the group discusses what to do about Freddy and Jason Voorhees, where he attempts to kiss her before turning back into Freddy. This dream helps Lori realize that she can pull Freddy out of the dream world, when a piece of Freddy's ear that she pulled out of the dream is still in her hand after she is woken up.

Retrieved from "https://nightmareonelmstreet.fandom.com/wiki/Dr._Campbell?oldid=22792"
Community content is available under CC-BY-SA unless otherwise noted.