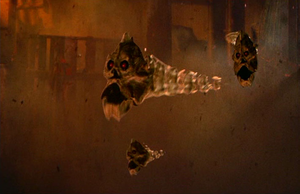 The Dream Demon animatronics were created by Jim Fowler and were manipulated by a team consisting of him, John Agnew, Bret Alexander, Adam DeFelice, Jennifer Howard and F. Lee Stone.

Before A Nightmare on Elm Street

When prolific child murderer, Freddy Krueger, was burned to death by a vengeful mob of Springwood, Ohio citizens for the crimes that he committed, the Dream Demons appeared before him and granted him the ability to enter and kill in dreams, provided that he had ample fear to use as a power source. Whenever a would-be victim defeated Freddy, the Dream Demons resurrected him to continue his work.

After Freddy's death, it was assumed that the Dream Demons returned to him as he used his dream manipulating powers to resurrect Jason Voorhees (disguised as Jason's mother, Pamela Voorhees) and sent him to Elm Street to kill the teenagers and spread the fear to allow him to return. However, the Dream Demons aren't mentioned in the movie.

Before A Nightmare on Elm Street

Freddy vs. Jason vs. Ash: The Nightmare Warriors

The Dream Demons' last notable appearance was at the end of the comic, Freddy vs. Jason vs. Ash: The Nightmare Warriors, where the Dream Demons emerged from the Necronomicon Ex-Mortis - The Book of the Dead -, accused Freddy of lying to them, said that they gave him power, and now they had nothing because of Freddy using the power of the book to gain reality-altering abilities. After they accused him of being 'not worthy', the trio of Dream Demons stripped Freddy of both his Necronomicon abilities and his Dream Manipulation powers - and reverted him to his original, unburnt form despite his pleas to them. Mortal, Freddy was killed for good as Ash Williams blasted him with his shotgun - and Freddy's lifeless body was sucked into the Necronomicon's vortex.

It was unknown if Freddy would come back, as a time-displaced Agent, Wesley Carter - who was sucked into the Necronomicon's vortex - arrived in 1964 after the police had gained the search warrant for Freddy. After he found it in front of him and remembering how it was never signed properly, Carter signed it impulsively. Thus, history was changed as Freddy was convicted of the murders rather than set free.

Retrieved from "https://nightmareonelmstreet.fandom.com/wiki/Dream_Demons?oldid=23862"
Community content is available under CC-BY-SA unless otherwise noted.