This is about the Freddy Krueger of the 2010 reboot, played by Jackie Earle Haley. 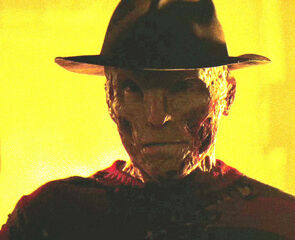 the Freddy Krueger of the 2010 reboot
Name
Freddy Krueger
Age
? (at the time of physical death)
Relationships
unknown
Occupation
Groundskeeper (when he was alive)


Child Molester (when he was alive)

Serial Killer (confirmed after death, not stated either way when he was alive)
Appearances
2010 remake
Portrayal
Jackie Earle Haley

This version of Freddy Krueger is the main antagonist of the A Nightmare on Elm Street Reboot. In this film, Freddy appeared once again as a Dream Demon and a serial killer after his death.

In life, he was a child molester. It isn't stated in the film whether or not he'd killed anybody when he was alive.

After death, he killed the majority of the teenage children who he blames for his death in their nightmares, but Nancy Holbrook and Quentin Smith survived.

Unlike the original Freddy Krueger, who, over the course of the series, developed a cheeky and dark humored personality and always cracked puns and jokes when he killed his victims, the reboot version of Freddy seemed to be more in line with how Wes Craven had originally envisioned the character; a much more serious killer.

Freddy Krueger was the Groundskeeper at Badham Preschool, a pedophile and child molester, and he had a more personal connection with the protagonist, Nancy Holbrook, as he molested her and the other preschoolers and she was his favorite. Freddy initially appeared to have been wrongly accused and seemingly looked like a friendly gardener around the children. The parents, after they heard about the abuse from their children and observed slashes on their skin and clothes that were consistent with his Trademark Glove, chased Freddy down to a building, in which Freddy locked himself in. One of the parents threw in a container of gasoline with a burning rag. It is implied that he did this to force him to come out, not to intentionally burn him to death. However, he did end up burning him to death. The parents did that to spare their children the trauma of having to testify against him in open court.

During the climax, Nancy pulled Freddy into the physical world and apparently killed him by severing his gloved-hand and slashed his throat with a broken paper cutter blade. However, Freddy was shown to still be alive and he killed Nancy's mother, Gwen Holbrook, from the mirror reflection.

The remake Freddy's clothing looked almost identical to that of both the Freddy Krueger of the original film series and the Freddy Krueger of Freddy's Nightmares; he wore the same red and green sweater and hat as well as sported the iconic glove that he used to kill his victims. The biggest difference were his burns, while the previous Freddy Kruegers did indeed look burnt the remake's Freddy's burns looked much more realistic and made Freddy realistically look like a person who had been horribly burnt. This Freddy also had a noticeable hole in his left cheek as well as one milky cloudy eye and one red blood shot eye. Along with those, this version of Freddy Krueger looked more gaunt and thinner than the previous Freddy Kruegers.

To be moved here

He apparently killed Rufus in a dream. 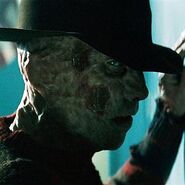 Freddy and Nancy in the dream world

Add a photo to this gallery

Retrieved from "https://nightmareonelmstreet.fandom.com/wiki/Freddy_Krueger_(Remake)?oldid=25445"
Community content is available under CC-BY-SA unless otherwise noted.