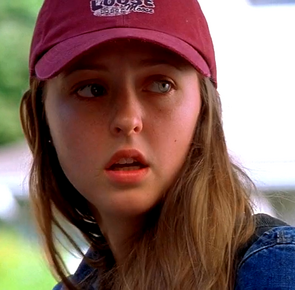 Gibb Smith was a Springwood teenager and a friend of Lori Campbell. She was in an abusive relationship with her boyfriend Trey Cooper who was later killed by Jason Voorhees.

She was the fifth victim of the Freddy vs. Jason killing spree to die and got killed by Jason.

Gibb Smith was a young woman from Springwood, Ohio. She was born around the year 1985. When she was eighteen-years-old, Gibb enjoyed the life of a party girl which included copious amounts of drinking and smoking cigarettes.

She was best friends with a girl named Lori Campbell and was dating a boy named Trey Cooper.

In 2003, Gibb was attending a private get-together at Lori's house, along with their friend, Kia Waterson. She initiated a round of the verbal game, "Marry, F**k, Kill", which Kia was uncomfortable with.

Lighting a cigarette, she went over to the window and opened it. Later, Gibb grew antsy and said that she was going to go on a beer run and flicked her cigarette out the window which bounced off the hockey mask of undead serial killer, Jason Voorhees who had been stalking the house.

At that moment, Trey Cooper and his friend Blake Mueller came over with a case of beer.

Trey admonished Gibb for kissing him after having just smoked a cigarette, and Gibb replied by calling him a cocksmith.

He then summoned her to the bedroom where they had sex. Afterward, Gibb went to take a shower. When she came out, she noticed blood pooling under the door.

Entering the bedroom, she found Trey folded in half in between the upended sides of the bed, clearly dead. She screamed, alerting the others and they all ran from the house to the police.

The following day at school, Gibb was with Lori and Kia walking down the corridor and was handed an invite for an outdoor rave taking place that evening.

Gibb commented that she needed a few dozen beers to get through this recent trauma.

She was present when Lori's ex-boyfriend, Will Rollins came back into her life, which ultimately led to Lori fainting from stress. Gibb and Kia took Lori to the nurse's station.

That evening, Gibb attended the party in a corn field. She had too much to drink and stumbled about until eventually passing out. Another partier named Frisell took note of her prone form and decided to have some fun by mounting her body.

Unconscious, Gibb began to dream. In the dream, she saw an image of Trey beckoning her to follow him and she blindly obeyed him.

This led her to a gigantic boiler room, which is the nightmare stomping grounds of the demonic dream entity, Freddy Krueger.

Freddy terrorized Gibb, chasing her all about the boiler room. He cornered her in a locker and was about to finish her off with his claws when something unexpected happened.

In the physical world, Jason Voorhees had appeared and began massacring the revelers. Taking a broken piece of pipe, he impaled Gibb and Frisell (who was still on top of her), killing them both. Krueger was outraged that Jason took his kill away from him.

Gibb is last seen when Jason Voorhees crashes the rave. While fleeing the party, Lori and Kia find her body. Lori screams in terror, horrified by her friend's death. 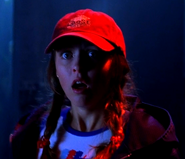 Gibb in the Nightmare

Gibb's Death
Add a photo to this gallery

Retrieved from "https://nightmareonelmstreet.fandom.com/wiki/Gibb_Smith?oldid=25506"
Community content is available under CC-BY-SA unless otherwise noted.