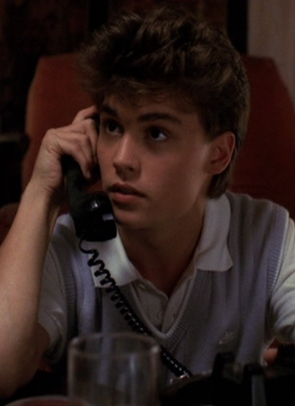 Glen Zachary Lantz as portrayed by Johnny Depp in the original
Name
Glen Lantz
Age
17 (at time of death)
Relationships
Nancy Thompson (Girlfriend; deceased)
Unnamed Parents
Unnamed Sibling (deceased)
Occupation
Student
Appearances
A Nightmare on Elm Street
Portrayal
Johnny Depp
Glen Lantz  was the boyfriend of Nancy Thompson, and one of the original Elm Street children whose parents burned Freddy Krueger to death after he was released on a technicality. He is the deuteragonist of A Nightmare on Elm Street and he was the third victim of Freddy Krueger's first post-death killing spree. Glen is portrayed by actor Johnny Depp.

The Burning of Freddy

In 1968, Glen's mother and father, along with Nancy's mother and father and other parents of Elm street, all worked together to locate child-murderer, Freddy Krueger, and his abandoned boiler room where he takes Elm Street children and murders them. Eventually, the parents found Freddy at his workplace and lit the complex on fire, killing the trapped Freddy inside because he killed 20 children.

Years later, Glen and the other Elm Street children were born and Freddy, after being turned into the undead Dream Demon, vowed revenge on the parents that killed him and to extract his revenge, he will kill the parents' children including Glen.

In the beginning of the first film, Glen, along with Nancy Thompson, Tina Gray, and Rod Lane, all had a nightmare about Freddy Krueger. However, Glen just took his dream as a regular nightmare. Glen first appears as he drives Nancy, Rod and Tina to school. When Tina talks about her horrible nightmare, he claims that nightmares are normal and leaves just before Tina asks him whether he had a nightmare last night.

That night, because Tina is afraid of staying home alone due to her mother's untimely trip out of town. She invites Glen and Nancy to her house as a source of comfort for herself. However, Glen's mother would not allow her son to spend the night alone with his girlfriend and his friends from school.

Glen still goes over to Tina's house for the sleepover. However, during the sleepover, Glen called his mother while using a radio to play a trick on her by making her think he is staying over at cousin Barry's place as an excuse for him not being home for the night.

After his mother believes he is with his cousin, she allows him to be out. After the phone call with mother, Tina and Nancy talked about Tina's nightmare she had the night before. During this conversation, Nancy reveals to Tina that she too had a dream about a man with the "finger knives". While Nancy tells Tina about her dream and describes the man she saw in the dream, Glen pauses with a look of recognition. However, when Tina suggests that she and Nancy dreamed of the same guy, Glen insists that it is impossible.

After hearing strange noises in the backyard, Glen and the girls go outside to see what was making the noise and it was revealed to be Rod trying to scare off all of them. After Rod crashes the sleepover, he and Tina headed upstairs for bed.

Though it's clear Glen wants to follow their lead and have sex with Nancy, she politely refuses. Stating that they were there to give Tina support and went to bed. While Glen slept on the sofa in the living room, which was under the room Tina and Rod were having loud sex, all of which Glen could hear, much to his personal displeasure, stating "Morality sucks". After everyone falls asleep, Tina was brutally murdered by Freddy Krueger in her dreamland. Hearing Tina’s last scream, Glen rushes to Tina’s room with Nancy from the other side.

When they get into Tina’s room, they see Tina’s dead body and Rod has already run away, making them believe Rod killed Tina. The next day, as Nancy begins to slip into what people consider to be madness, she tries to use Glen to help her.

One night, Glen climbs up to Nancy's outside bedroom window and enters into her room. After a short conversation about beliefs about people's dreams, Nancy asked Glen to be her guard and watch her sleep. Nancy orders Glen to wake her up if she looks like she is struggling while she is asleep.

After Glen agrees, Nancy fall asleep and enters her dream world. In her dream, Glen was following Nancy to the jailhouse that is holding Rod. After Nancy reached the jailhouse, Glen disappeared and she saw Rod through the outside window. However, while Rod was sleeping on his bed, Freddy entered his cell and was about to strangle Rod to death with his blankets.

After looking away and calling out to Glen, Freddy disappeared and Rod was safely sleeping after Nancy looked back through the window. Freddy then appeared outside the jailhouse and chased Nancy back to her house and into her bedroom, where she found Glen sleeping on the chair. Freddy burst through the mounted mirror on Nancy's door and began to wrestle with her on the bed and floor. Even while Nancy was screaming for Glen to wake up, Glen, remained asleep.

However, in the physical world, Glen really was asleep and could not hear Nancy struggling in her bed. During her struggle, Nancy's alarm clock went off and woke Glen and Nancy. After yelling at Glen for falling asleep, both of them heard Nancy's mother coming to check up on her screaming daughter. Glen ran through the window and waited for Marge to leave.

After Marge left, Glen and Nancy ran to the jailhouse to stop Freddy from killing Rod. However, when they both, along with Donald Thompson and Lt. Garcia, entered Rod's cell, he was already strangled and hung to death by his blanket.

The next day, both Glen and Nancy, along with their parents and other patrons, attended Rod's funeral. Afterwards, Nancy was taken to Katja Institute for testing while Glen was sent home.

After Nancy was released from the institute, she and Glen went to Springwood square for lunch while discussing about how to stop the nightmares once and for all. Before he left, Glen finds that Nancy is reading a book about how to set traps and defend herself in certain situations.

Later that night, Nancy and Glen talked over the phone about how they were going to defeat Freddy. Their plan was to have Nancy fall asleep to bring Freddy out of her dream and have Glen beat him with a baseball bat. Before the phone call ended, Nancy told Glen to not fall asleep in order to avoid Freddy.

In order to keep himself awake, Glen was watching television while listening to his records at the same time. Glen's mother caught Glen half asleep and woke him up to tell him to get ready for bed due to how it was almost midnight. Glen agreed and after his mother left, he continued to listen to music and watch television to keep himself awake.

After midnight, Glen was supposed to meet with Nancy at her place. However, Glen fell asleep in bed watching TV and listening to music. Ultimately, Glen fell victim to Freddy Krueger and in the physical world, Freddy drags Glen into his bed (along with the covers, television, and radio) after a giant hole emerges. After that, a geyser of blood spews out of the hole onto the ceiling.

Upon his death, Glen's mother opens his bedroom door to check up on him and soon finds her son vanished from his room and massive amounts of blood remaining. After killing him, Freddy absorbed his soul, but in the 4th movie, when Alice won against Freddy, his souls and the souls of other victims were released.

After Nancy defeated Freddy in her own dream world, she demanded that all of her friends and mother return to her from Freddy's grasp. While possibly still dreaming after searching and defeating Freddy in her dream world, Nancy exits her house to be accompanied by her mother.

Glen, along with Rod and Tina, arrive to Nancy's house with Glen driving his car. However, after Nancy entered the vehicle, the roof of the car closed to reveal the "Freddy Stripped Sweater" pattern as the design. Then, the car starts to automatically lock the doors, close all the windows, and drive down the road.

Knowing Freddy is in control of the car, Glen, Tina, and Rod, all try to find a way to escape from the car while Nancy is yelling out to her mother for help. As the car drives away, Freddy's arm crashes through the front door window and grabs Marge and pulls her inside while little girls are playing jump rope while singing One, Two, Freddy's Coming For You.

This sequence was the final scene in the original A Nightmare on Elm Street. Even though characters who have died are visible, they are still dead in reality because this sequence was a dream created by Nancy involving Freddy Krueger.

Glen is mentioned in Nancy's Diary

Glen appears on TV, presenting his own This Is Your Brain on Drugs advert being watched by Spencer, before getting hit in the head with a frying pan by Freddy.

Despite Glen not appearing in the film, his death is referenced by a limo driver. Heather, at one point was nearly killed by Freddy in the same way as Glen until she wakes up in time.

Quentin Smith - a remake character based on Glen

Retrieved from "https://nightmareonelmstreet.fandom.com/wiki/Glen_Lantz?oldid=22804"
Community content is available under CC-BY-SA unless otherwise noted.