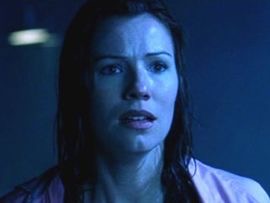 Heather was a minor and later deceased character in Freddy vs. Jason played by actress Odessa Munroe.

She was the first victim killed by Jason Voorhees in the physical world or in the Dream World.

Heather was a camp counselor at Camp Crystal Lake during Jason's dream sequence before Freddy Krueger awakened him.

Heather would be drinking behind the back of some of the young campers of Crystal Lake. Before she leaves the Campers late at night, a young boy named Billy asks if Heather could stay due to him having a nightmare, where Heather refuses and orders Billy to go back to bed.

She waits for a boy named Mike in the middle of the night where she strips down and starts swimming, believing that Mike was present.

After she pulls herself back at the dock, she notices Jason and starts running in fear away towards the woods trying to escape him. However, Jason appears from behind and kills Heather.

Heather at the Friday the 13th wiki.

Retrieved from "https://nightmareonelmstreet.fandom.com/wiki/Heather?oldid=21426"
Community content is available under CC-BY-SA unless otherwise noted.