For the equivalent of this character from the 2010 remake, see Gwen Holbrook. 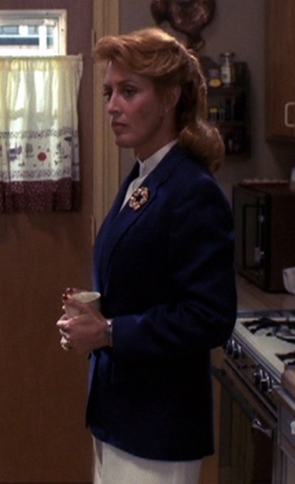 Marge Thompson was the mother of Nancy Thompson and the ex-wife of Donald Thompson.

In the original film series, she was one of the parents that burned Freddy Krueger to death before the 1981 dream murders that took place in A Nightmare on Elm Street.

In the book adaptation by Bob Italia of the first A Nightmare on Elm Street movie, she personally kills Freddy Krueger by shooting him, with Donald Thompson's gun.

Marge is also the fourth and the final victim of Freddy's first post-death killing spree, in A Nightmare on Elm Street (1984).

Marge probably married Donald Thompson in the late 1950s. In 1966, Marge gave birth to her daughter, Nancy, and treated her with royalty. However, in 1968 she saw how child-murderer, Freddy Krueger, was released on a technicality and participated with other parents in killing him without a trial. In the early 1970s she and her husband Donald got divorced, and Nancy Thompson stayed with her mother.

In 1981, Tina Grey, her daughter's friend, was murdered. Tina's boyfriend Rod Lane was arrested because the police thought he killed Tina. Soon, however, he was strangled to death by his own bed sheets while he was still in jail. Nancy kept on telling her that it was Freddy Krueger who was responsible and that he lived in the dreams of the teenagers. Marge eventually ended up taking Nancy to a dream clinic, where everything went downhill after that. She bought bars that she put up on the windows and locked the doors to keep Nancy in. Later, Marge, apparently drunk, takes Nancy down to the basement, where she reveals the truth about Freddy Krueger to her. (In a deleted scene, Marge reveals to Nancy that she wasn't always an only child. She, along with Tina, Rod, and Glen, each had an older brother or sister that was killed by Freddy when he was alive). She assures her that he cannot hurt her because she, along with the other parents, had burned him alive. After the death of her boyfriend Glen Lantz, Nancy takes matters into her own hands and goes into her dreams one last time in an attempt to bring Freddy Krueger out into the real world and defeat him. The battle between Nancy and Freddy begins and he falls into some booby traps that Nancy had set up before she fell asleep. After luring him into the basement, she covers him in flammable liquid and sets him on fire. She locks him down in the basement long enough to call her father over to help her.

Unfortunately, Krueger had gotten away and both rush upstairs to discover that Krueger had killed Marge. After killing her, he absorbed her soul and it was released in the 4th movie along with other souls of Freddy's victims.

When Nancy turns her back on him, taking away his energy and defeating him, she walks out of the bedroom and is suddenly outside her home. She discovers her mother and friends, who are all alive and well. She then concludes that it was all just one big nightmare. She gets trapped in the car with her friends when the roof, (which is red and green), slams down and locks them in. Her mother stands, waving and smiling, as Nancy screams for help while the car drives off. Then Freddy's arm bursts through the window on the door and pulls her through it. In A Nightmare on Elm Street 2: Freddy's Revenge, Jesse Walsh claims that Marge committed suicide in the living room of the house at 1428 Elm Street. In A Nightmare on Elm Street 3: Dream Warriors, Nancy mentions that her mother died in her sleep.

Retrieved from "https://nightmareonelmstreet.fandom.com/wiki/Marge_Thompson?oldid=21463"
Community content is available under CC-BY-SA unless otherwise noted.