Quentin Smith is the male protagonist in the A Nightmare on Elm Street remake. In the film he has a longtime crush on Nancy Holbrook, the female protagonist. He is a high school blogger.

He is the equivalent of Glen Lantz in the original A Nightmare on Elm Street. He is portrayed by Kyle Gallner.

Unlike the grumpy and often provoking Jesse Braun, Quentin is quiet, patient and easy-going, if not a bit geeky. He has great love for Nancy, and also shows sympathy to Freddy Krueger after dreaming him being burned to death by his father, and displays a strong sense of morality.

Quentin's first appearance is at the diner. He is there with Jesse and one of his other friends, it is clear he has a crush on Nancy and appears nervous around her. When Jesse finds his ex-girlfriend Kris with her new boyfriend Dean, Jesse angrily slams a tip on the table and leaves. Quentin however stays behind and has a flirtatious chat with Nancy. Unfortunately,Jesse yells for Quentin and ends the conversation. Quentin is later called by Nancy and is told that Kris had died. The two meet at a library and proceed to study on sleep deprivation. Nancy and Quentin find out that they went to the same preschool, Bradham Preschool, after Nancy finds an old school photo hidden in her mother's office. Upon further research they find that all the children from the preschool have died in someway or form, including their own friends. It is due to this discovery that they and also find out about Freddy Krueger, the man in their dreams.

Quentin believes that it will all blow over but then one day during a training with his schools swim team, he falls asleep and has a nightmare, seeing how Krueger is murdered. Seeing that it was the parents of the children from Bradham preschool, including his own father and Nancy's mother, he charges angrily into his father's office. The two have an arguent about if Krueger's death and whether or not it was justified. Nancy and Quentin go to the pharmacy to get more pills so he could stay awake but the employee refuses to give him a refill.

Nancy has a couple of nightmares and is scratched by Krueger. Quentin takes Nancy to the hospital to have her wounds checked. While there Quentin steals adrenaline and decides to get Nancy out of the hospital. On the road he asks Nancy out after they find Krueger.

They have a car wreck when Krueger shows up on the road, but from there they find their old preschool and discover the cave that Freddy took the children to. They soon find out that he took pictures of Nancy while she was being abused by Krueger. The two share a touching moment as they talk about their fears and they then kiss. Nancy then enters a terrifying nightmare to catch Freddy and bring him to the real world. As she struggles, Quentin tries desperately to wake her, shaking her and begging her, but failing. Finally as a last hope, he takes the adrenaline shot and plunges it into Nancy's chest. This wakes her and she pulls Freddy out. Quentin tries to attack Freddy but is stabbed in the process and thrown against a wall. Freddy then attacks Nancy but she is saved by Quentin. Quentin is slashed again by Freddy and as he backs away in fear, Freddy raises his glove to strike. Before he can, Nancy cuts his hand off and then cuts his throat. She then uses a lamp to burn the place.

Afterwards, Quentin is taken to an ambulance with Nancy next to his side.

Quentin in a deleted scene of the movie. 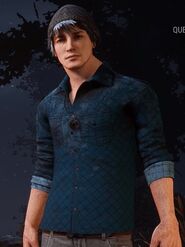 This article is a stub. You can help Elm Street Wiki by expanding it.

Retrieved from "https://nightmareonelmstreet.fandom.com/wiki/Quentin_Smith?oldid=27863"
Community content is available under CC-BY-SA unless otherwise noted.