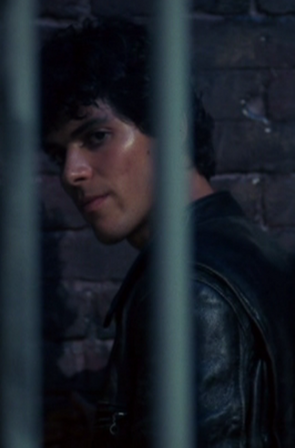 Rod Lane was the boyfriend of Tina Gray and was the former main suspect of her murder, though he wasn't convicted and Donald Thompson said that Tina's murder was still unsolved. He appeared in A Nightmare on Elm Street and Rod is one of the Elm Street children. Rod also was the second victim of Freddy Krueger's first post-death killing spree. He is portrayed by actor Jsu Garcia (credited in the film as Nick Corri). His parents, along with numerous other parents, burned Freddy to death.

In the film, it was introduced that Rod is the boyfriend of Tina Gray, described as one of those rebellious rocker types. He also indirectly references in the film that he is having the same nightmares plaguing Nancy and Tina.

After a particularly nasty dream that had shaken Tina, Rod invades a slumber party Glen and Nancy were having for her, taking her upstairs to her mother's bedroom for intimacy. Up there, Tina and Rod fall asleep, with Rod waking up as his girlfriend is being slaughtered in front of him. He escapes, but is considered to be the only suspect based on logical circumstances.

The following day, he grabs Nancy while she is walking to school, imploring to her that he didn't do it, but not having a logical explanation as to what happened. He is soon arrested by Nancy's father and the rest of the Springwood Police Department, who find a switchblade on his person although he did not kill Tina, but which Freddy did. For the reminder of his time on camera, Rod spends his time in prison, proclaiming his innocence to Nancy, and revealing that they have been sharing the same dreamstalker. At the near end of the film, Donald realized that Nancy was right about Freddy's existence and by association it can be assumed that he knew Rod was innocent although this is never specified. But it is most likely, because he realized that Nancy was right about Freddy.

While Nancy and Glen are trying to get in to see Rod, with Nancy knowing full well he is in danger, Rod's bed sheets wrap around his neck, dragging him out of bed and hanging him from the prison window, shocked by Nancy and Glen as well. Because of the circumstances, Rod's death is dismissed as a suicide. He was buried in a cemetery. His soul was absorbed by Freddy, but was released in the 4th movie along with other souls of people Freddy murdered.

Actor Jsu Garcia--not as Rod--appears in Wes Craven's New Nightmare. He is present as are many others as they are laying Heather Langenkamp's on-screen husband to rest.

Rod Lane at the Horror wiki.

Retrieved from "https://nightmareonelmstreet.fandom.com/wiki/Rod_Lane?oldid=21457"
Community content is available under CC-BY-SA unless otherwise noted.