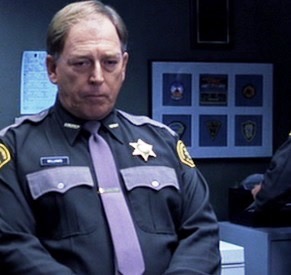 Sheriff Williams is a character in Freddy vs. Jason and the novel A Nightmare on Elm Street: Suffer the Children and one of the people who knows about Freddy Krueger and his history, which he's trying to make that no one mention that bastard's name again since he and the people of Springwood stopped Freddy in the past.

He was played by Gary Chalk.

It's unknown how he knew Freddy or became a sheriff, but we do know that he and the people of Springwood beat Freddy long time ago which it have been 4 years of peace until in 2003, he thinks that Freddy is back after Trey Cooper's death.

Williams was the sheriff of Springwood County in the late 1990s and early 2000s. Along with other members of law-enforcement as well as the administrative staff of Westin Hills Psychiatric Hospital, Sheriff Williams was part of a conspiracy to make everyone in town forget the name Freddy Krueger.

Fully aware that Fred Krueger was a demonic entity that could kill people in their dreams, he believed that by removing all knowledge of him, he could then take away his power.

To a large extent, Sheriff Williams was correct in this belief. He orchestrated the removal of any and all record of there ever having been a man named Freddy Krueger from all media sources.

In 2003, Freddy Krueger tried to regain his power by making the people of Springwood know fear again.

Unable to take direct action at this time, he resurrected the essence of an undead serial killer named Jason Voorhees and sent him to Springwood on a killing spree.

Then, Jason broke into the house at 1428 Elm Street and murdered a teenager named Trey Cooper. One of the residents of the house, Lori Campbell, was brought down to the police station for questioning. Sheriff Williams confused Lori by asking her questions about her dreams.

One of Williams' deputies, a newly-hired out-of-towner named Scott Stubbs tried to ask him about Freddy Krueger, but Williams warned him against pursuing such a line of questioning, noting that they do things a little differently in Springwood than what Stubbs might be accustomed to.

Sheriff Williams at the Friday the 13th wiki.

Retrieved from "https://nightmareonelmstreet.fandom.com/wiki/Sheriff_Williams?oldid=25464"
Community content is available under CC-BY-SA unless otherwise noted.