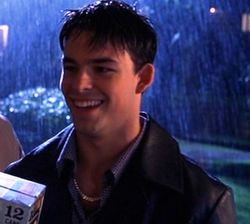 Trey Cooper was a Springwood teenager and an friend of Blake. He was in an abusive relationship with his girlfriend Gibb Smith and was the first victim of the Freddy vs. Jason killing spree to die and got killed by Jason Voorhees.

He was played by Jesse Hutch.

Trey Adam Gordon Cooper was a young man from the town of Springwood, Ohio, who was born around the year 1985. He was the embodiment of the worst machismo stereotypes and could be demanding, rude and outright cruel.

His best friend was a boy named Blake Mueller. As a teenager, he was dating a woman named Gibb Smith. Trey detested the fact that Gibb was a smoker and made it a point to verbalize his displeasure at every given opportunity.

On a rainy night in 2003, Trey and Blake decided to crash a private gathering at 1428 Elm Street, which was the home of Lori Campbell.

Gibb and Lori's best friend Kia Waterson were both at the house at the time which Trey brought a case of beer to help spice up the evening. Upon entering the house, Gibb kissed him and Trey admonished her about kissing him after she had been smoking.

Later, Gibb and Trey decide to have sex in one of the bedrooms. Then, Trey summoned Gibb to him as if she were a puppy and when she didn't respond quickly enough for him he snapped, "Babe, don't make me ask you twice, okay?"

During their sexual escapade, the power to the house cut out, so they lit a few candles. When they were done, Trey told her that he doesn't like to be touched after sex which Gibb was upset about and decided to take a shower which Trey appreciated, citing that her hair smelled like Menthols.

While Gibb was taking a shower, the masked undead serial killer known as Jason Voorhees broke into the house and made his way to the bedroom.

Trey was lying on his stomach with a beer in his hand and was unaware of Jason's presence which Jason stabbed him multiple times in the back with a machete and then pulled each end of the bed inwards, folding Trey's body backwards, snapping his spine.

When Gibb exited the shower, she noticed a puddle of blood pooling from underneath the door. Then, she opened the door and saw Trey's broken and folded body in a flash of lightning. Screaming in terror, she alerted the others and ran from the house.

The following evening, Gibb attended a corn field rave and became highly intoxicated which she passed out in the middle of a clearing and began to dream.

In the dream, Freddy Krueger manifested in the form of Trey Cooper, who appeared as some partially shadowed head inside of a row of corn.

Shocked to see him, she began stumbling towards him as he called out to her saying, "I'm dead one day and you're already out gettin' shitfaced? Same old Gibb."

Trey's Death
Add a photo to this gallery

Trey at the Friday the 13th wiki.

Retrieved from "https://nightmareonelmstreet.fandom.com/wiki/Trey_Cooper?oldid=21438"
Community content is available under CC-BY-SA unless otherwise noted.